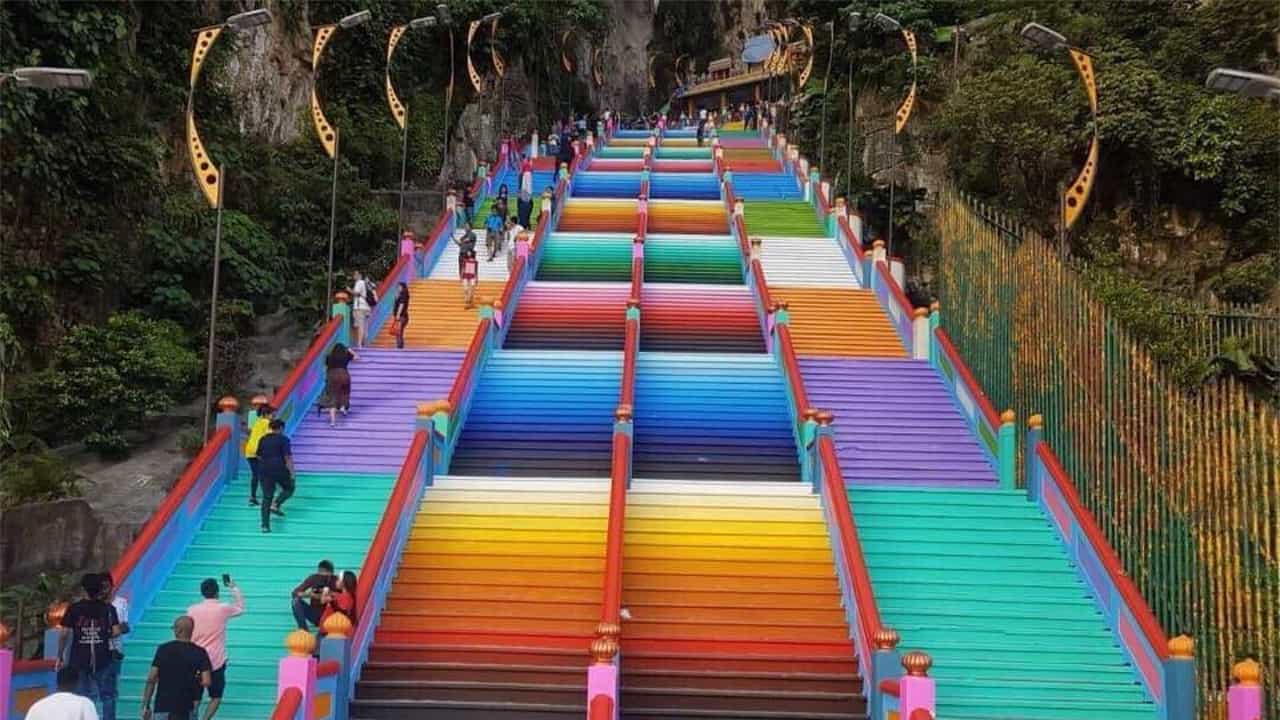 Batu Caves is a an iconic and popular tourist attraction in Selangor. Site of a Hindu temple and shrine, Batu Caves attracts thousands of worshippers and tourists, especially during the annual Hindu festival, Thaipusam. A limestone outcrop located just north of Kuala Lumpur, Batu Caves has three main caves featuring temples and Hindu shrines. Its main attraction is the large statue of the Hindu God at the entrance, besides a steep 272 climb up its steps to finally view the stunning skyline of the city centre. Monkeys frolic around the caves, and it is a popular spot for rock climbing enthusiasts. Paintings and scenes of Hindu Gods can also be seen in the Ramayana Cave.

Most tourist has always known the famous 272 steps leading to the entrance of the Sri Subramaniar Swamy Temple in Batu Caves as being in the very common red and white colours that are associated with most Hindu temples. However, visitors of the renowned temple received a pleasant surprise that could only be described as a feast for the eyes after the sombre stairs were transformed into an Instagram-worthy background with a myriad of colours seemingly overnight. The colourful new steps are already proving popular with Instagrammers, but the religious site is also a pilgrimage for many Hindus and features a massive golden statue of the god Lord Murugan.

The Dark Cave of Batu Caves : The Dark Dominion in the City

Located 1 kilometre north of Kuala Lumpur and rising 326 metres above sea level is Batu Caves Hill, where two worlds coexist, so distinct and contrasting even to an untrained eye. One world exists on the surface of this limestone hill spanning an area of only 1.56 square kilometres. It is nonetheless the most prominent limestone hill in Selangor. Limestone is a hotbed of many rare plants. As many as 269 species of plants have been discovered here, constituting about a quarter of plant species found in the limestone ecosystem in West Malaysia, of which 48 species are endemic to the peninsula.

Meanwhile, another world is tucked inside the cave, engulfed in pitch darkness, and has never seen the light of day. Batu Caves Hill has some 20 caves and its biggest and most well-known cave is the Temple Cave, and beside it is the Dark Cave. Scientific studies of the cave can be traced back as early as 1896 by a European named Ridley. Batu Caves is among the most researched caves in Southeast Asia today.

The Dark Cave of Batu Caves is located about 1km north of Kuala Lumpur. Its entrance is situated beside the Temple Cave. Visitors have to walk up the long staircase before reaching the entrance on the left of the stairs. Due to limited parking spaces, visitors are advised to take public transport or reach early, especially on public holidays. To take a bus, hop on Bus No. 11 from Bangkok Bank near Central Market; to take a train, just board KTM Komuter and alight at the Batu Caves stop and walk to the main entrance.